Ahead of the PCI move to deprecate the use of ‘early TLS’, we’ve previously taken steps to disable TLSv1.0.

Unfortunately at that time we encountered some issues which led us to rollback these changes. This was to allow users of operating systems that did not – yet – support TLSv1.1 or higher to download Percona packages over TLSv1.0.

Since then, we have been tracking our usage statistics for older operating systems that don’t support TLSv1.1 or higher at https://repo.percona.com. We now receive very few legitimate requests for these downloads.

Consequently,  we are ending support for TLSv1.0 on all Percona web properties.

While the packages will still be available for download from percona.com, we are unlikely to update them as the OS’s are end-of-life (e.g. RHEL5). Also, in future you will need to download these packages from a client that supports TLSv1.1 or greater.

For example EL5 will not receive an updated version of OpenSSL to support versions greater than TLSv1.1. PCI has called for the deprecation of ‘early TLS’ standards. Therefore you should upgrade any EL5 installations to EL6 or greater as soon as possible. As noted in this support policy update by Red Hat, EL5 stopped receiving support under extended user support (EUS) in March 2015.

To continue to receive updates for your OS and for any Percona products that you use, you need to update to more recent versions of CentOS, Scientific Linux, and RedHat Enterprise Linux.

—
Photo by Kevin Noble on Unsplash

Percona Server for MySQL 8.0 comes with enterprise grade total data encryption features. However, there is always the question of how much overhead – or performance penalty – comes with the data decryption. As we saw in my networking performance post, SSL under high concurrency might be problematic. Is this the case for data decryption?

To measure any overhead, I will start with a simplified read-only workload, where data gets decrypted during read IO.

During query execution, the data in memory is already decrypted so there is no additional processing time. The decryption happens only for blocks that require a read from storage.

For the benchmark I will use the following workload:

The datasize for this workload is about 50GB, so I will use

to emulate a heavy disk read IO during the benchmark. In the second run, I will use

so all data is kept in memory and there are NO disk read IO operations.

I will only use table-level encryption at this time (ie: no encryption for binary log, system tablespace, redo-  and undo- logs).

The server I am using has AES hardware CPU acceleration. Read more at https://en.wikipedia.org/wiki/AES_instruction_set 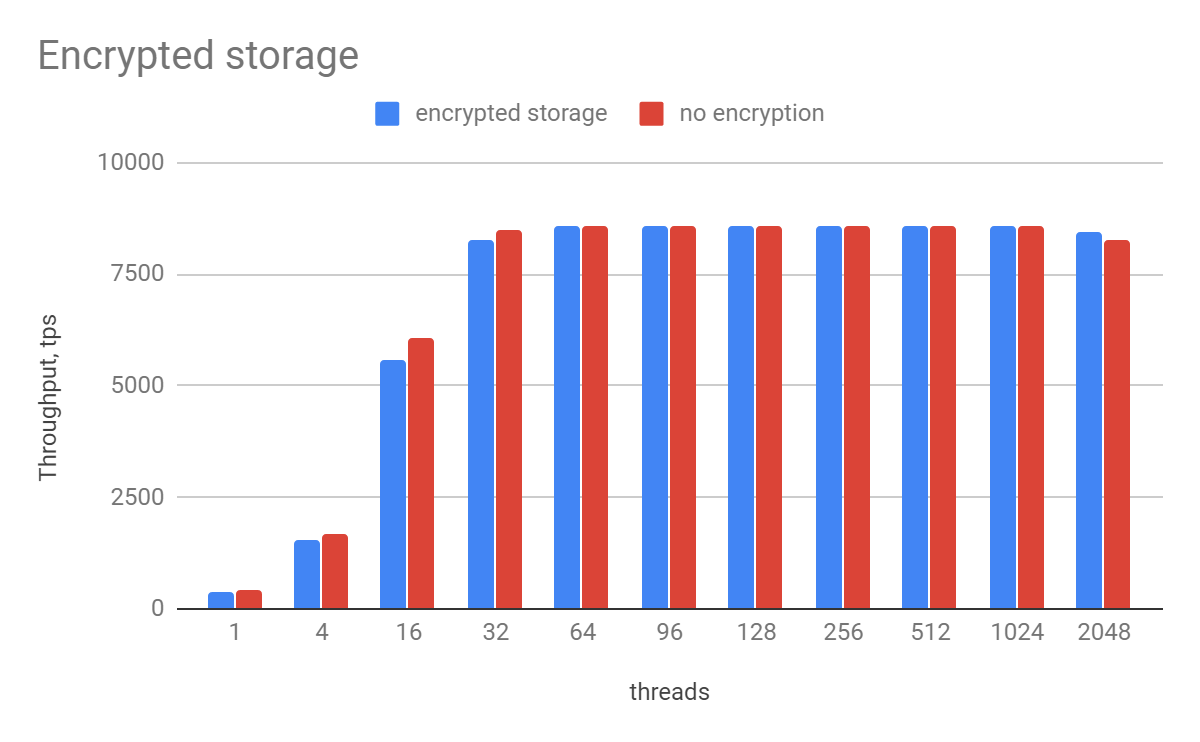 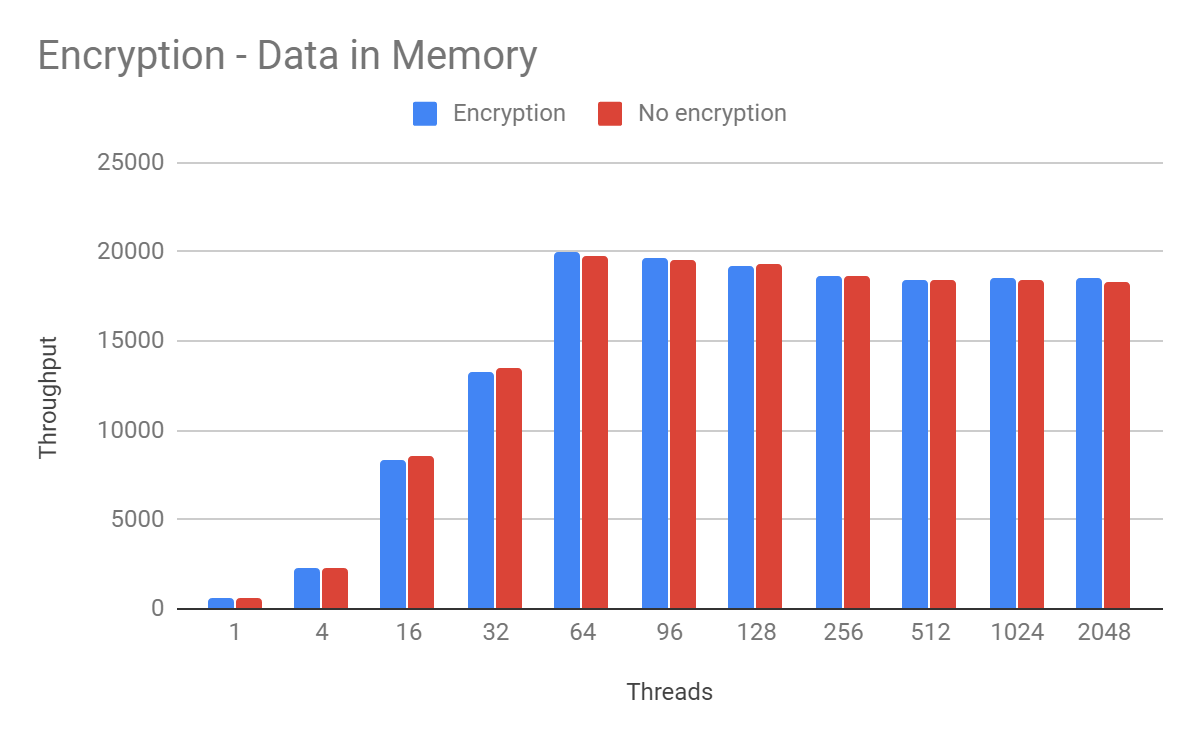 For a high number of threads, there is no measurable difference between encrypted and unencrypted storage. This is because a lot of CPU resources are spent in contention and waits, so the relative time spend in decryption is negligible.

However, we can see some performance penalty for a low number of threads: up to 9% penalty for hardware decryption. When data fully fits into memory, there is no measurable difference between encrypted and unencrypted storage.

So if you have hardware support then you should see little impact when using storage encryption with MySQL. The easiest way to check if you have support for this is to look at CPU flags and search for ‘aes’ string:

If you’ve been following this blog (my colleague, David Busby, posted about it yesterday) or any tech news outlet in the past few days, you’ve probably seen some mention of the “Heartbleed” vulnerability in certain versions of the OpenSSL library.

So what is ‘Heartbleed’, really?

In short, Heartbleed is an information-leak issue. An attacker can exploit this bug to retrieve the contents of a server’s memory without any need for local access. According to the researchers that discovered it, this can be done without leaving any trace of compromise on the system. In other words, if you’re vulnerable, they can steal your keys and you won’t even notice that they’ve gone missing. I use the word “keys” literally here; by being able to access the contents of the impacted service’s memory, the attacker is able to retrieve, among other things, private encryption keys for SSL/TLS-based services, which means that the attacker would be able to decrypt the communications, impersonate other users (see here, for example, for a session hijacking attack based on this bug), and generally gain access to data which is otherwise believed to be secure. This is a big deal. It isn’t often that bugs have their own dedicated websites and domain names, but this one does: http://www.heartbleed.com

Why is it such a big deal?

One, because it has apparently been in existence since at least 2012. Two, because SSL encryption is widespread across the Internet. And three, because there’s no way to know if your keys have been compromised. The best detection that currently exists for this are some Snort rules, but if you’re not using Snort or some other IDS, then you’re basically in the dark.

What kinds of services are impacted?

Any software that uses the SSL/TLS features of a vulnerable version of OpenSSL. This means Apache, NGINX, Percona Server, MariaDB, the commercial version of MySQL 5.6.6+, Dovecot, Postfix, SSL/TLS VPN software (OpenVPN, for example), instant-messaging clients, and many more. Also, software packages that bundle their own vulnerable version of SSL rather than relying on the system’s version, which might be patched. In other words, it’s probably easier to explain what isn’t affected.

SSH does not use SSL/TLS, so you’re OK there. If you downloaded a binary installation of MySQL community from Oracle, you’re also OK, because the community builds use yaSSL, which is not known to be vulnerable to this bug. Obviously, any service which doesn’t use SSL/TLS is not going to be vulnerable, either, since the salient code paths aren’t going to be executed. So, for example, if you don’t use SSL for your MySQL connections, then this bug isn’t going to affect your database server, although it probably still impacts you in other ways (e.g., your web servers).

What about Amazon cloud services?

According to Amazon’s security bulletin on the issue, all vulnerable services have been patched, but they still recommend that you rotate your SSL certificates.

Do I need to upgrade Percona Server, MySQL, NGINX, Apache, or other server software?

No, not unless you built any of these and statically-linked them with a vulnerable version of OpenSSL. This is not common. 99% of affected users can fix this issue by upgrading their OpenSSL libraries and cycling their keys/certificates.

What about client-level tools, like Percona Toolkit or XtraBackup?

Again, no. The client sides of Percona Toolkit, Percona XtraBackup, and Percona Cloud Tools (PCT) are not impacted. Moreover, the PCT website has already been patched. Encrypted backups are still secure.

There are some conflicting reports out there about exactly how much information leakage this bug allows. What’s the deal?

Some of the news articles and blogs claim that with this bug, any piece of the server’s memory can be accessed. Others have stated that the disclosure is limited to memory space owned by processes using a vulnerable version of OpenSSL. As far as we are aware, and as reported in CERT’s Vulnerability Notes Database, the impact of the bug is the latter; i.e., it is NOT possible for an attacker to use this exploit to retrieve arbitrary bits of your server’s memory, only bits of memory from your vulnerable services. That said, your vulnerable services could still leak information that attackers could exploit in other ways.

How do I know if I’m affected?

You can test your web server at http://filippo.io/Heartbleed/ – enter your site’s URL and see what it says. If you have Go installed, you can also get a command-line tool from Github and test from the privacy of your own workstation. There’s also a Python implementation. You can also check the version of OpenSSL that’s installed on your servers. If you’re running OpenSSL 1.0.1 through 1.0.1f or 1.0.2-beta, you’re vulnerable. (Side note here: some distributions, such as RHEL/CentOS, have patched the issue without actually updating the OpenSSL version number; on RPM-based systems you can view the changelog to see if it’s been fixed, for example:

Also, note that versions of OpenSSL prior to 1.0.1 are not known to be vulnerable. If you’re still unsure, we would be happy to assist you in determining the extent of the issue in your environment and taking any required corrective action. Just give us a call.

How can I know if I’ve been compromised?

If you’ve already been compromised, you won’t. However, if you use Snort as an IDS, you can use some rules developed by Fox-IT to detect and defer new attacks; other IDS/IPS vendors may have similar rule updates available. Without some sort of IDS in place, however, attacks can and will go unnoticed.

Are there any exploits for this currently out there?

Currently, yes, there are some proofs-of-concept floating around out there, although before this week, that was uncertain. But given that this is likely a 2-year-old bug, I would be quite surprised if someone, somewhere (you came to my talk at Percona Live last week, didn’t you? Remember what I said about assuming that you’re already owned?) didn’t have a solid, viable exploit.

So, then, what should I do?

Ubuntu, RedHat/CentOS, Amazon, and Fedora have already released patched versions of the OpenSSL library. Upgrade now. Do it now, as in right now. If you’ve compiled your own version of OpenSSL from source, upgrade to 1.0.1g or rebuild your existing source with the -DOPENSSL_NO_HEARTBEATS flag.

Once that’s been done, stop any certificate-using services, regenerate the private keys for any services that use SSL (Apache, MySQL, whatever), and then obtain a new SSL certificate from whatever certificate authority you’re using. Once the new certificates are installed, restart your services. You can also, of course, do the private key regeneration and certificate cycling on a separate machine, and only bring the service down long enough to install the new keys and certificates. Yes, you will need to restart MySQL. Or Apache. Or whatever. Full stop, full start, no SIGHUP (or equivalent).

Unfortunately, that’s still not all. Keeping in mind the nature of this bug, you should also change / reset any user passwords and/or user sessions that were in effect prior to patching your system and recycling your keys. See, for example, the session hijacking exploit referenced above. Also note that Google services were, prior to their patching of the bug, vulnerable to this issue, which means that it’s entirely possible that your Gmail login (or any other Google-related login) could have been compromised.

Can I get away with just upgrading OpenSSL?

NO. At a bare minimum, you will need to restart your services, but in order to really be sure you’ve fixed the problem, you also need to cycle your keys and certificates (and revoke your old ones, if possible). This is the time-consuming part, but since you have no way of knowing whether or not someone has previously compromised your private keys (and you can bet that now that the bug is public, there will be a lot of would-be miscreants out there looking for servers to abuse), the only safe thing to do is cycle them. You wouldn’t leave your locks unchanged after being burgled, would you?

Also note that once you do upgrade OpenSSL, you can get a quick list of the services that need to be restarted by running the following:

Where can I get help and/or more information?

In addition to the assorted links already mentioned, you can read up on the nuts and bolts of this bug, or various news articles such as this or this. There are a lot of articles out there right now, most of which are characterizing this as a major issue. It is. Test your vulnerability, upgrade your OpenSSL and rotate your private keys and certificates, and then change your passwords.