Over time, software evolves and it is important to stay up to date if you want to benefit from new features and performance improvements.  Database engines follow the exact same logic and providers are always careful to provide an easy upgrade path. With MySQL, the mysql_upgrade tool serves that purpose.

A database upgrade process becomes more challenging in a managed environment like AWS RDS where you don’t have shell access to the database host and don’t have access to the SUPER MySQL privilege. This post is a collaboration between Fattmerchant and Percona following an engagement focused on the upgrade of the Fattmerchant database from Amazon Aurora MySQL 5.6 to Amazon Aurora MySQL 5.7. Jacques Fu, the CTO of Fattmerchant, is the co-author of this post.  Our initial plan was to follow a path laid out previously by others but we had difficulties finding any complete and detailed procedure outlining the steps. At least, with this post, there is now one.

Issues with the regular upgrade procedure

How do we normally upgrade a busy production server with minimal downtime?  The simplest solution is to use a slave server with the newer version. Such a procedure has the side benefit of providing a “staging” database server which can be used to test the application with the new version. Basically we need to follow these steps:

If the new server was temporary, you’ll need to repeat most of the steps the other way around, this time starting from the new server and ending on the old one.

What we thought would be a simple task turned out to be much more complicated. We were preparing to upgrade our database from Amazon Aurora MySQL 5.6 to 5.7 when we discovered that there was no option for an in-place upgrade. Unlike a standard AWS RDS MySQL (RDS MySQL upgrade 5.6 to 5.7) at the time of this article you cannot perform an in-place upgrade or even restore a backup across the major versions of Amazon Aurora MySQL.

We initially chose Amazon Aurora for the benefits of the tuning work that AWS provided out of the box, but we realized with any set of pros there comes a list of cons. In this case, the limitations meant that something that should have been straightforward took us off the documented path.

Since we couldn’t use an RDS snapshot to provision a new Amazon Aurora MySQL 5.7 instance, we had to fallback to the use of a logical backup. The intended steps were:

Even those simple steps proved to be challenging.

At that point, we were able to confirm, using “show master status;” that the write node was indeed generating binlog files.  Since our procedure involves a logical backup and restore, we had to make sure the binary log files are kept for a long enough time. With a regular MySQL server the variable “expire_logs_days” controls the binary log files retention time. With RDS, you have to use the mysql.rds_set_configuration. We set the retention time to two weeks:

You can confirm the new setting is used with:

For the following step, we needed a mysqldump backup along with its consistent replication coordinates. The option

of mysqldump implies “Flush table with read lock;” while the replication coordinates are read from the server.  A “Flush table” requires the SUPER privilege and this privilege is not available in RDS.

Since we wanted to avoid downtime, it is out of question to pause the application for the time it would take to backup 100GB of data. The solution was to take a snapshot and use it to provision a temporary Amazon Aurora MySQL 5.6 cluster of one node. As part of the creation process, the events tab of the AWS console will show the binary log file and position consistent with the snapshot, it looks like this:

From there, the temporary cluster is idle so it is easy to back it up with mysqldump. Since our dataset is large we considered the use of MyDumper but the added complexity was not worthwhile for a one time operation. The dump of a large database can take many hours. Essentially we performed:

The schema consist of three databases: db1, db2 and db3.  We have not included the mysql schema because it will cause issues with the new 5.7 instance. You’ll see why we dumped the schema and the data separately in the next section.

Then, in the new Amazon Aurora MySQL 5.7 cluster, you configure replication and start it by:

Now, if everything went well, the new Amazon Aurora MySQL 5.7 cluster will be actively syncing with its master, the current Amazon Aurora MySQL 5.6 production cluster. This process can take a significant amount of time depending on the write load and the type of instance used for the new cluster. You can monitor the progress with the show slave statusG command, the Seconds_Behind_Master will tell you how far behind in seconds the new cluster is compared to the old one.  It is not a measurement of how long it will take to resync.

You can also monitor throughput using the AWS console. In this screenshot you can see the replication speeding up over time before it peaks when it is completed.

Now that you have tested your application with the staging cluster and are satisfied how it behaves with Amazon Aurora MySQL 5.7, the very last step is to migrate the production load. Here are the last steps you need to follow:

The application is down from steps 2 to 8.  Although that might appear to be a long time, these steps can easily be executed within a few minutes.

So, in summary, although RDS Aurora doesn’t support an in place upgrade between Amazon Aurora MySQL 5.6 and 5.7, there is a possible migration path, minimizing downtime.  In our case, we were able to limit the downtime to only a few minutes. 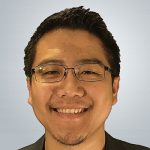 Jacques is CTO and co-founder at the fintech startup Fattmerchant, author of Time Hacks, and co-founder of the Orlando Devs, the largest developer meetup in Orlando. He has a passion for building products, bringing them to market, and scaling them.